Check out our newsletter archive and free resources with eBooks like: "Effective Indexing in Postgres"

PostGIS vs. Geocoder in Rails

This article sets out to compare PostGIS in Rails with Geocoder and to highlight a couple of the areas where you'll want to (or need to) reach for one over the other. I will also present some of the terminology and libraries that I found along the way of working on this project and article as I set out to understand PostGIS better and how it is integrated with Rails.

Picture via Annie Spratt on Unsplash

I have built a number of Rails applications over the years that show locations on a map, have nearby search functionality, and I had never used PostGIS before! How was this possible? The reason is that there is a Ruby gem named Geocoder which enables you to do these sorts of queries, and it's quite efficient! That said, there is a reason that PostGIS exists. For more complex geo queries I’d recommend reaching beyond Geocoder to PostGIS.

As an example, if you wanted to find homes which have a school within 1km of them, or if you wanted to draw an oddly shaped polygon on a map and search within it, this is the world where PostGIS shines and makes these complex geo queries possible.

In this article we will be covering:

The source code referenced in this article can be found here.

Postgres comes with a number of built-in extensions that you can enable, but unfortunately PostGIS (Spatial and Geographic objects for Postgres) isn't one of them. In order to enable this extension, you will have to use a Postgres install with PostGIS support. I recommend using the official postgis docker image, but luckily many hosted Postgres solutions come with PostGIS already available. If you are not sure, you can query the available extensions with the following query:

If you'd like to see if the extension is already enabled, you can run this query:

And finally, to enable this extension, you can use the command create extension postgis, but since we're working within Rails, there is a Gem that will take care of this step for us as we'll see below.

If you have confirmed that your version of Postgres supports the postgis extension, you're ready to integrate it with your Rails application. This can be done by using the activerecord-postgis-adapter gem. Two things need to be done to get up and running. The first is to update the adapter within config/database.yml to be set to postgis. Next, if this is a new application, you can run rails db:create as normal, but if it is an existing one, you'll have to run the command rake db:gis:setup. This command is enabling the postgis extension in your database.

We'll be working with sample data for a realtor website that allows us to find homes in a variety of ways, including homes that are nearby a local school. There are two models: homes and schools. The Rails migration to create these tables is below:

By using activerecord-postgis-adapter we are able to define PostGIS columns within our migration file. When working with PostGIS you can store a point (latitude + longitude) as a single column of type ts_point, whereas when working with Geocoder the latitude and longitude are stored as floats in separate columns. Because we are comparing the two approaches, we will store the data both ways, but typically you would choose one approach or the other.

PostGIS geographic columns can be indexed using GiST style indexes. GiST indexes are required over B-Tree indexes when working with geographic data because coordinates cannot be easily sorted along a single axis (such as numbers, letters, dates, etc...) in a way that would allow the database to speed up common geographic operations.

The example project for this article contains a seeds file (run with rake db:seed) which will generate 100k homes and 100 schools in and around the Atlanta, Georgia area.

The Rails PostGIS adapter is based on a library named RGeo, which while incredibly powerful, I found a little bit confusing due to a lack of documentation. I ended up building a small helper class to generate different geo objects for me. The first thing to point out is what SRID is. Just like the imperial and metric systems are used to measure and weigh amounts using an agreed upon reference point, coordinates also need a coordinate reference system to ensure that the latitude and longitude that one uses means the same thing to different people when referring to a single place on earth. 4326 is the spatial system used for GPS satellite navigation systems and the one we will be using within this article.

One last thing to define is what WKT is. Well-known Text representation of geometry is a string representation of a point, line string, and polygon (among other things) that we will be using in our examples in this article. This is the format Postgres (PostGIS) receives and displays geographic data types in.

Finding Nearby Records with PostGIS and Geocoder

One of the most common geo queries used in applications is to find all records within X distance from a known point (the user's location, an event, a search, etc...). Because we installed Geocoder and added reverse_geocoded_by :latitude, :longitude to our Home class, we can use the nearby method to find all homes within 5km of this latitude and longitude (which happens to be Atlanta, Georgia). Geocoder likes to have arrays with latitude and then longitude, as opposed to PostGIS which prefers the exact opposite order!

This query ran in about 5ms on my computer (searching through 100k records)... pretty fast! The reason it is fast is because we added an index on the latitude and longitude fields, but also because Geocoder applies a bounding box filter which utilises the index. Remember the Spatial Reference System (SRID) that we mentioned above? Because our coordinates do not take place on a Cartesian plane, we can’t use a standard distance formula to calculate the distance between two points. Although we won’t venture further into the math of this query below, it takes into consideration the Earth’s spherical nature when calculating the distance between two coordinates as specified by latitude and longitude. This article dives into more detail on these calculations if you are interested.

We'll have to build our own near query when working with PostGIS, but don't worry, it's pretty straight forward! The g_near method lives within the Home model, and takes advantage of the ST_DWithin function provided by PostGIS. Remember that we have to convert our point into the correct WKT format so that PostGIS understands the data we are passing it.

This query performs just about as fast as the Geocoder version (because of our GiST index on the coords column), but is definitely a little easier on the eyes to read.

Finding Records Within a Bounding Box with PostGIS and Geocoder

Geocoder provides us a way to find all records within a bounding box (roughly a rectangle, ignoring projection onto a sphere), and we just have to pass it the bottom left (south west) and top right (north east) coordinates.

Because it can use the index on latitude and longitude, it is quite efficient.

To perform a bounding box query using PostGis, we'll create a method named g_within_box inside of the Home model, and utilize a PostGIS function named ST_MakeEnvelope along with the && operator.

Again, this version performs at about the same efficiency as the Geocoder version. 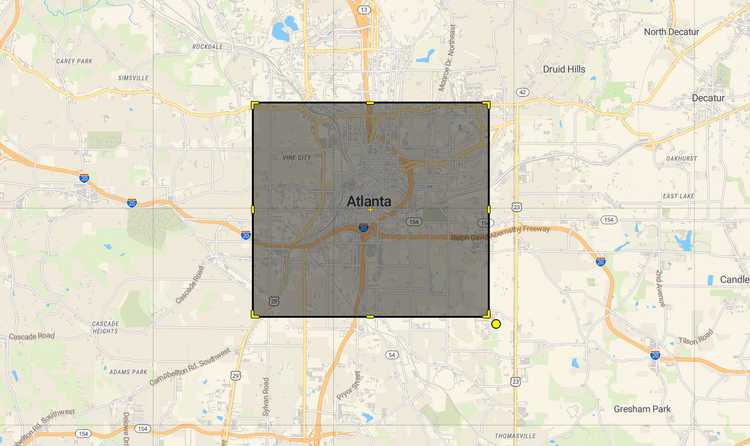 Finding Records Within a Polygon with PostGIS and Geocoder

We're now into territory that requires PostGIS. To find records inside of a polygon, along with the help of our Geo class helper and the ST_Covers function from PostGIS, we can create a method named g_within_polygon in our Home model. This polygon is a triangle, where the last point is the same as the first one, thereby "closing" the shape of the polygon.

This query remains efficient due to the use of our GiST index, searching through 100k records in about 5ms. 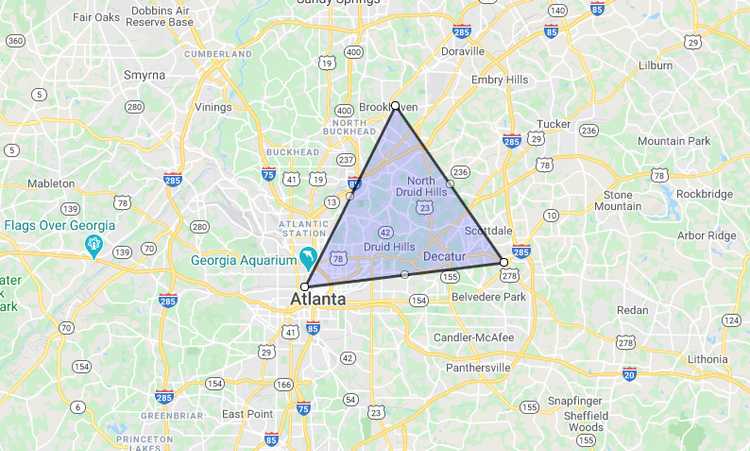 Finding Nearby Related Records with PostGIS and Geocoder

Using PostGIS it is also possible to find related nearby records. What do I mean by that? Let's try to find available homes that are within 1km of a school. This can be done by joining to the schools table and utilizing ST_DWithin for the on clause. Starting with the SQL we'd like to produce:

Within the Home model of our Rails application, we can create two scopes that allow us to find these homes. We're able to join 100k homes to the schools table (100 schools) based on their proximity in approximately 16ms.

We've only scratched the surface of what you can do with PostGIS, yet we were able to cover a ton of functionality that is common among websites that allow you to filter results based on their location. That said, if PostGIS isn't available as an extension on your version of Postgres, or you aren't requiring the power that PostGIS provides, Geocoder offers you a great alternative.