Check out our free resources and eBooks like: "Effective Indexing in Postgres"
❮ Index Advisor (in-app in pganalyze)

Index Advisor: How to Reason About Missing Index Opportunities 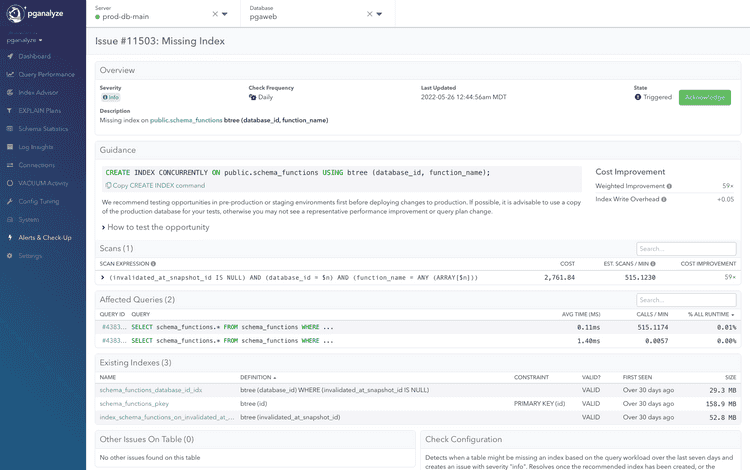 Index Advisor creates issues for newly detected opportunities. They give you details on the opportunity and the context to evaluate the suggestion. When reasoning about an index recommendation, you may want to refer to existing indexes on the table, queries affected, and table scans.

The cost improvement is based on the Postgres query execution cost model. It is an average across the individual cost improvements for each scan that can benefit from the query, weighted by the frequency of the scan (based on the queries that contain the scan). More frequent queries will have a more significant impact on the overall weighted cost improvement.

On specific index opportunities, query detail pages, and schema statistics table detail pages, you will see a section called “Scans”. Each scan has an associated estimated cost that is averaged across all queries it is referenced in. For more information about how this works, read our Indexing Engine documentation.

On the Index Advisor opportunity page, the scan list includes the following:

Cost improvements are expressed as a multiplier, for example, 1.2× faster than the old estimated cost. The table sorts by cost improvement.

Affected queries include all queries on a particular table that contain at least one condition in their WHERE or JOIN clause that would be affected by the index recommendation. E.g., if a column in a proposed index is used as a filter condition in a WHERE clause, the query may benefit from this index.

Couldn't find what you were looking for or want to talk about something specific?
Start a conversation with us →